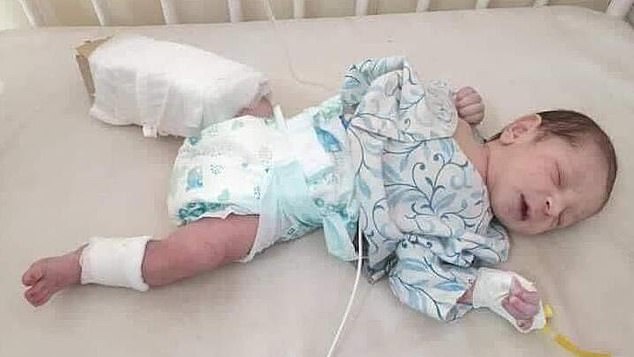 A baby which was shot twice in the leg during an attack on a Kabul maternity unit which killed 24 people including mothers, nurses and newborns has survived.

Three gunmen, suspected to be members of terror group ISIS, entered the building in the Afghan capital dressed as police officers before throwing grenades and opening fire with rifles on Tuesday.

At least two of those shot dead were newborn babies and 15 men, women and children were injured. The attackers were later shot dead.

But one of the newborns, who was born just three hours before the attack, survived after doctors operated on her shattered right leg, the Times reported.

And during the attack, another mother was forced to give birth in silence while hiding in a room with other pregnant women and a midwife as carnage unfolded around them.

The surviving injured newborn was among several of babies which have been taken to be cared for at the Indira Gandhi Children’s Hospital in Kabul.

Her mother, Nazia, died in the attack and the newborn was given the same name by her father Rafiullah after he had laid his wife to rest.

Dr Noor ul-Haq Yousafzai, a director at the hospital, told the Times: ‘We set Nazia’s fracture, so she will be able to walk when she grows up.’

‘But to see a newborn baby, just three hours old, shot twice. Everyone is shocked. This is inhuman.’

And the mother who gave birth in silence was helped by a midwife who severed the baby’s umbilical cord with her hand.

‘The mother was in pain but was trying not to make any sound,’ the midwife said.

‘She even put her finger in the newborn baby’s mouth to stop her from crying,’ the woman told AFP by phone on Friday, her voice still shaking three days after the attack.

The raid on the Barchi National Hospital has sparked international outrage.

There were 26 mothers in the hospital on the morning gunmen posing as members of the Afghan security forces burst in, said the Doctors Without Borders charity, which runs the maternity ward.

Eleven of them were killed during the hours-long attack, including three in a delivery room with their newborn babies. Five were wounded.

Another 10 sheltered in ‘safe rooms’, which are common in Afghanistan and are often armoured to protect the occupants from gunfire or rockets.

The midwife, who spoke to AFP on the condition of anonymity, also rushed to one of the safe rooms when the emergency siren went off.

As she and some of the women huddled inside, they could hear gunshots as the attackers went from room to room throughout the hospital.

Then one of the women began to give birth.

‘We helped her with our bare hands, we had nothing else in the room except some toilet paper and our scarves,’ the midwife said.

‘When the baby was born, we cut the umbilical cord using our hands. We used our headscarves to wrap the baby and the mother.’

As the terrified women tried to stay quiet, they could hear the gunmen outside asking them to open the door.

‘But we knew they were not (security force members),’ she said.

After the attack 18 babies were taken to another hospital for treatment – some of them carried from the scene by heavily armed soldiers.

No group has claimed the attack, but the United States blamed the Islamic State group.

U.S. Special Representative Zalmay Khalilzad, the architect of the country’s pact with the Taliban, said in blaming ISIS militants that they opposed any Taliban deal and sought to trigger an Iraq-style sectarian war in Afghanistan.

But a senior Afghan government official said the patterns of recent attacks showed the involvement of the Taliban and the affiliated Haqqani Network, whose head, Sirajuddin Haqqani, is the deputy chief of the Taliban.

The official, who declined to be identified, questioned Khalilzad’s assessment as ‘premature’ adding that all the evidence suggested it was not Islamic State who carried out the raid on the hospital.

The Taliban has warned it is ‘fully prepared’ to counter Afghan forces.