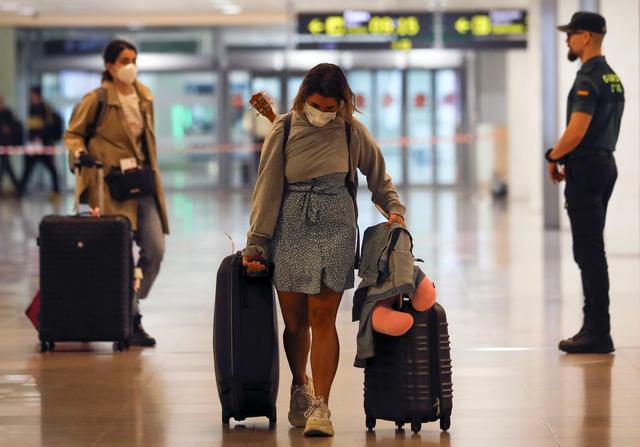 Spain imposed a quarantine on incoming overseas passengers on Friday and added new travel restrictions to prevent the spread of the coronavirus as the country’s daily death toll falls.

From Friday, anyone arriving from abroad must spend two weeks self-quarantined at home or in a hotel. Additionally, authorities extended existing restrictions to entry into Spain until June 15 and limited access to five airports and eight sea ports.

The few dozen passengers arriving from abroad at Spanish airports on Friday were tested for the virus, filled in a form with an address and phone number to allow medical tracking, and received a sheet of paper with instructions they must follow

“We cannot leave our homes for 14 days, only to go to the doctor or supermarket, we keep the security distance, always wear the mask when we go out, and that’s about it,” said Rosalie Gallego, who flew into Madrid from Havana.

The measures were imposed as new fatalities fell to 138 on Friday from more than 200 the day before. The daily toll has been falling steadily since reaching a peak of 950 in early April.

Authorities say a strict lockdown and the travel restrictions have helped curb the contagion.

The number of cases rose on Friday to 230,183, although the antibody testing of a sample of 60,000 people across Spain suggested that as many as 2.3 million have had the disease.

In recent days, authorities have started easing the rules at different rates on a regional basis. In some areas, bars and restaurants have been allowed to open their terraces.

On Friday, the government lifted more restrictions in the smaller Balearic and Canary Islands, where weddings are allowed again as well as meetings of up to 15 people.

Some of the toughest restrictions in Madrid and Barcelona were eased and stores can now receive customers without appointments and museums can reopen with strictly limited capacity.

Stores of over 400 square meters are allowed to reopen all over the country, but also with limited capacity.

The lockdown phase-out has raised concerns that a second-wave outbreak could hit the country, and officials said those fears justified the quarantine on overseas travellers and the other restrictions on international travel.

However the move was not welcome in France, which said it would impose a quarantine on travellers from Spain.

“There is no unease, these are measures taken within the European Union framework,” he told radio station Cadena Ser.

You may also like...
Related Topics:2020, Death, Quarantine, Spain

See The New Twist In Evacuation Of Nigerians From Canada
Trump Says He Doesn’t Want To Talk To Xi, Could Even Cut China Ties
Advertisement

COVID-19: Volunteers At LUTH Shut Operations Over Non-Payment Of Allowances