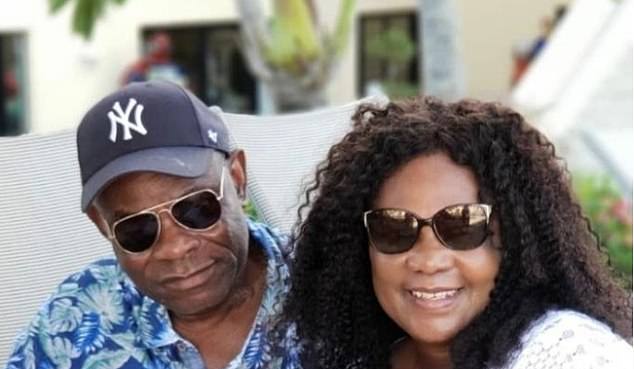 Dr James Oniah, a retired radiologist, succumbed to Covid-19 on April 24 while Mary passed away from the virus on May 4.

They both died at King George Hospital in Ilford, East London leaving behind three children as well as other family members and friends who saw them as ‘mum and dad’.

Mrs Oniah, 61, is thought to have contracted Covid-19 during her job as a Regional Director for a care home provider before her 79-year-old husband was also struck down.

The couple, who had a son and two daughters, lived in Ilford.

Oke, 25, who still lives at home, told MailOnline that his mother and father were ‘wonderful parents’ and that the family was still coming to terms with their tragic deaths but said he didn’t want to say anymore.

The couple’s niece Siobhan Livingstone added that her aunt and uncle had ‘truly touched the hearts of many, gone far too soon’.

A crowd-funding page has now been set up to raise money for a funeral.

According to a tribute on gofundme.com, James and Mary were a ‘loving, caring and welcoming couple’.

The heartfelt message continues: ‘It is believed Mary contracted corona virus in her line of duty as a Regional Director in care homes, and sadly her husband James, a former doctor (Radiologist) also contracted the disease.

‘Mary was trained as a nurse, as well as a midwife at the University Teaching Hospital (UTH) in Lusaka in Zambia. ‘They ended the fight for their lives against COVID-19 at King George Hospital in London 10 days apart, leaving behind children and a wider network of family and friends who all considered them their mum and dad.’

Adding her thoughts, family friend Nila Patel said: ‘These two people were very warm, loving and caring souls. They had an unconditional love never to be forgotten. My deepest condolences to the family.’

Dr Oniah worked in a string of hospitals as an agency radiologist but had recently retired. He had studied at the University of Sussex after setting up home in the UK from Onitsha in Nigeria.

Mrs Oniah had worked as a Regional Director for a number of care homes since 2011 but since September 2017 had been working for Maria Mallaband Care Group Limited.

She had studied nursing and midwifery at St Georges and Roehampton University teaching Hospital in South London and palliative care nursing at City, University of London.

Vicky Craddock, operations manager for Maria Mallaband Care Group Limited said: ‘Mary was a valued colleague and friend to many people in our company, she will be sorely missed. Our heartfelt sympathies go out to her family at this difficult time.’

You may also like...
Related Topics:Coronavirus, Doctor, Man, Nigerian, Wife