Woman Dies 3 Days After Delivery Of Set Of Twins, After Waiting 18 Years For A Child (Photo)

A Nigerian woman from Imo State who has been looking for a child for 18 years has died after giving birth to twins.

It is a tragic news for a family after having to wait for 18 years for a child only for the woman to die three days after delivery.

Read the sad story as reported by Nigerian Tribune:

“What am I hearing? Sister Chika is dead? But she just gave birth to a set of twins! God, why do bad things happen to good people?”

These rhetorical questions and assertions above laden with grief, piercing the bustling atmosphere at the notorious Ogbe-Ijoh Market early on June 24, drew the attention of our correspondent who was at the market.

Upon enquiry, the Nigerian Tribune was told that Mrs Chika Anthonia Voghor, who could not bear children for 18 years, had been delivered of a set of twins (boy and girl), but eventually lost her life.

An indigene of Umunachi Mmukoro in Isiala Mbano Local Government Area of Imo State, Mrs. Voghor, a fifth born, who was married to an Urhobo, was a trader at the Ogbe-Ijoh market. She was described as a very calm, loving and peaceful lady. Her bereaved husband, Mr Ediri Voghor, who owned a patent medicine store at Market Road, while speaking with the Nigerian Tribune, wondered what would become of the set of twins his wife left behind.

“We had our traditional wedding in 2002 and had our church wedding in 2003 at the St. Andrew’s Cathedral, Warri. From 2002, she didn’t get pregnant. During those years, we were everywhere looking for a solution. We went to different hospitals, but the doctors said nothing was wrong with us. Over the years, fibroid was discovered and operated surgically. During the fibroid operation, there were no complications; everything went smoothly, still no child,” he noted, fighting back the tears.

“Pressures were coming from everywhere; gossips and indirect mocking, but we held on to our faith in God. In fact, pressures helped to strengthen her faith in God. She so much believed in God. She laid all her hope in God Almighty that one day, God would bless her with children,” Mr Voghor disclosed.

According to him, not long, the tide turned to their direction and God answered their prayers and his wife became pregnant in 2019.

“One day last year, she told me she was down with fever and had also missed her monthly flow; we went to the hospital for a test and it came out positive! We were very happy but we kept the news to ourselves. We didn’t want people to hear it from our mouths. Pregnancy is not something hidden, no matter how much you try to hide it, it will surely show one day. So, we wanted people to know by seeing it. From there, we registered for antenatal at Lily Hospital. It was in that hospital that we did a scan, and the scan showed she was carrying a baby. Oh God! I was beside myself with joy! I cannot explain the feeling I had. The joy was so much that I shed tears of joy,” he exclaimed.

Mr Voghor disclosed that on June 21, 2020, when his wife’s pregnancy was nine months old, they went to the hospital for delivery. He said during the process preceding delivery, the doctor announced that due to the fibroid operation she had once had, she would not be able to deliver normally except through caesarean section.

“We went there on Sunday and by Monday, they carried out the caesarean operation to deliver the babies—a boy and a girl. I visited her after they brought her out of the theater and she was fine and happy. We talked and laughed,” he said. 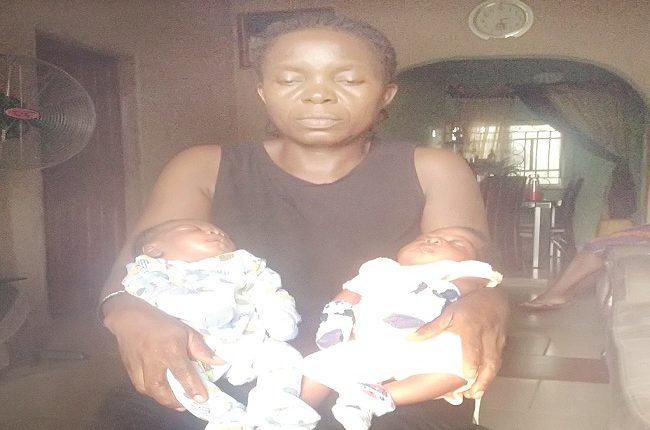 The woman’s sister carrying the babies

The eldest sister of the deceased, Mrs. Nwamuruamu Akachukwu Scholastica, who said they are eight in the family and the deceased was number five, related the atmosphere shortly after delivery.

“She gave birth on Monday. On Tuesday, she was happy rejoicing, and full of life. In fact, the news was an exciting one to everyone that knew her,” the obviously distraught woman stated.

Read Also:  #BBNaija: Bobrisky says he’s too big to be on the reality show, calls it “a mess”

Nigerian Tribune gathered that by Tuesday evening, the health of the deceased began to relapse. The deceased’s sister, who witnessed the last hours, related what happened thus: “In the evening, that Tuesday, around 8 p.m., she told me that she was not breathing well. Then I told her to sleep and face her side. Having slept that way, she was still feeling uncomfortable, then she asked me to go and call a nurse and I immediately did that. The nurse came and found out that her pulse was low, so she quickly injected her and she became calm.

“After a while, the doctor came; she complained to him that she was having serious pains and she didn’t know why. The doctor examined her and said she looked pale, then did some tests on her and found out that her blood percentage was low and she was given blood transfusion. After that, the doctor said that they would have to do some scan on her to know why her blood percentage was low. They did it and found out that she had internal bleeding. The doctor then asked her what she had eaten and she said she took water, tea, pepper soup and rice.

“Then the doctor said they would have to take her back to the theatre. Immediately she heard that she started shivering and looked scared. But the doctor assured her that everything would be okay. So, she was taken back into the theatre and brought back.

“When they brought her back, the guys that were trying to lift her back to her bed, started complaining that she had so much weight. After dropping her in bed, she was calm, but after about 10 minutes, she was turning her head and rubbing her chest. Before we knew what was happening, substances started coming out of her mouth.

“I started screaming, calling for the doctor. Then one of the nurses left to call the doctor. They then took her back to the theater. I was shivering and crying. I waited for hours and nothing was happening. I didn’t see any sign of them. I then decided to call my people. Around 2:00 a.m, the doctor came out and asked me to call her husband. I told him that even if I call the husband, though he has a car, there was no way he could come because there was curfew. But the doctor insisted that I called him. I called him but his number was not reachable so I had to call my brother who then called him. After some time, her husband called to say he couldn’t come because his car was bad.

“He asked me if there was any problem I told him I couldn’t tell because I didn’t understand what was happening. He then said he would try his best to be around before 6:00a.m. He came but he met his wife dead. She died at exactly 5:30a.m in my presence. I couldn’t even look at the children. I was devastated.”

Mr Voghor, who suspected some negligence on the part of the clinic officials, said “I leave everything to God.” 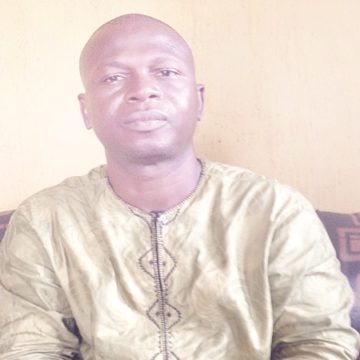 Who takes care of the twins?

Although the twins are currently with the elder sister of the deceased, nurturing the babies has been a daunting challenge. Mr. Voghor said his wife’s elder sister, in whose custody the babies have been, is the one taking care of them for the meantime, adding that the babies are fed with a particular type of baby formula meant for babies with no access to breast milk.

“There is a baby formula specially designed for babies that are not taking breast milk. It is a substitute for breast milk. It is very costly; 800g of it costs about N7, 000 and they finish that within one week. If there’s any way the government, individuals or organisations can help me, they should please do,” he pleaded